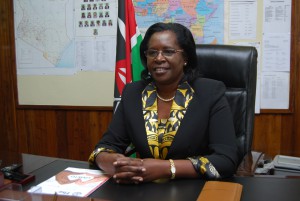 H.E. Prof. Ruthie Chepkoech Rono is the current High Commissioner. She joined the Mission in March, 2013, and is the immediate High Commissioner of the Republic of Kenya to the Kingdom of Netherlands, the Hague, with accreditation to the Czech Republic. She was also Kenya’s Permanent Representative to the Organisation for the Prohibition of Chemical Weapons (OPCW) and Kenya’s Governor to the Common Fund for Commodities.

Prof. Rono is an accomplished academician/scholar and diplomat, and brings on board wealth of skills and experience as a Psychologist, Educationist, Researcher, Author, Diplomat and administrator, having previously served as the Dean of Studies, School of Arts and Sciences at the United States International University Africa (USIU-A) in Kenya. She is an Alumnus of Kenyatta University, Kenya (PhD in Education, 1992), and Masters of Arts (M.A. in Educational Psychology) from the University of Cincinnati, United (States of America (USA), 1980. Prof. Rono has written and published widely for various audiences. She had authored and published books in various aspects of Psychology, and Gender, and contributed significantly in several published works, including contributions to renowned and referred international journals such as the Journal of Cross-Cultural Psychology, the World Psychiatry Journal, and the Journal, of Traumatology among others.

She has previously served as a board member on a number of boards of institutional of excellence, and training institutions in Kenya, and a member on the Specialist Committee for Social Sciences, and the National Council for Sciences and Technology in Kenya.

Professor Rono is a recipient of “The Outstanding African Ambassador Award, 2012” an award by “The Voice Magazine”in 2012 achievers award. She is also a recipient of the role model award 2012, from her home country; the Certificate of Recognition as a Woman of Exemplary Achievement, given by the Kericho Family Support Network,in 2007. Professor Rono was recognised as one of the outstanding Kenyans in 2004, and decorated by the Head of State, receiving “the Head of State Commendation (HSC)”, by His Excellency, President Mwai Kibaki, President of the Republic of Kenya, in 2004.

Professor Ruthie Chepkoech Rono is Married to Professor Paul Kimutai Rono, and both are blessed with two “Adult” children.

Open Google Maps Widget settings to configure the Google Maps API key. The map can't work without it. This is a Google's rule that all sites must follow.